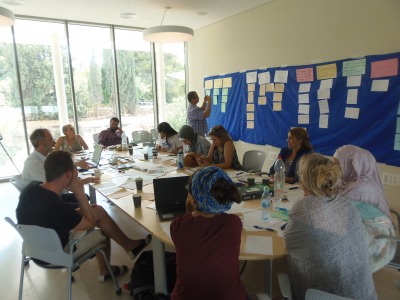 "Building Visions for the Future of Jerusalem: A Bottom Up Approach" is a Leonard Davis Institute (Hebrew University) and Israel-Palestine: Creative Regional Initiatives (IPCRI) collaboration funded by the European Union. Since 2017,the project engaged residents of East and West Jerusalem, urban planners, students, women, youth and local leaders to work together to shape the current and future reality of their neighbourhoods and the city as a whole. Urban planning  and formal negotiations on Jerusalem have generally ignored the voices of the residents, in particularly those from marginalized and diverse communities. This project aims to dignify  diverse voices, enhance knowledge of the complexity of Jerusalem and contribute towards a constructive public and civil society engagement on  the future of the city. The project includes surveys of residents of Jerusalem, mapping of local needs, community projects and increased efficacy of local residents of Jerusalem in shaping the future of the city.
In its first stage, the project engaged residents of different Jerusalem neighbourhoods to generate equitable solutions to local problems. The project provided capacity  building and utilizes participatory techniques to empower local communities and worked with residents to create small interventions that improve their reality. The community projects are decided by the residents and included creation of green spaces, public gardens and libraries, beautifying neighbourhoods and other initiatives or actions prioritized by the residents. We believe that focusing on current inequalities while building partnerships at the neighbourhood level can empower marginalized communities and answer some of their needs.
During 2019, Jerusalem residents working in thematic groups discussed wider issues of concern. Israeli, Palestinian and mixed thematic groups highlighted residents needs according to prioritized goals and visions on the future of Jerusalem. The thematic groups included: 1) Youth and Education, 2) Public Spaces, 3) Local Political Leadership and 4) Safety and Protection. The thematic groups will utilize photo voice to empower and inspire participants and other residents exposed to the project through pictures. The thematic process will also culminate in policy papers contributing to local input toward short and long-term solutions in Jerusalem. In parallel our research team collected visions from local leaders from the entire city. At end, the participants’ visual visions, the local leaders’ verbal visions’ and the policy papers will be presented in a traveling exhibition that will uncover some of Jerusalem’s hopfull future.
Through this approach we aim to engage and inspire residents, policy-designers and other activists to work on local creative initiatives, increase knowledge of the complexities of Jerusalem and contribute towards a negotiated solution to the city.